Epicenter of Development: Company Plans and the Flow of Investments in Ukrainian Economy

By the degree of impact on national economy Epicenter-K group of companies may be compared with Walmart, the giant of American retail, leaving behind Home Depot, the largest American retailer in household products.

Walmart is US company which manages the largest global wholesale and retail trade chain. In 2020 Walmart united 11 500 points of sale differing by their format; over 5 thsnd. of them were located in US.

The company also operates on the other American markets, in Europe, Asia and Africa as well. Total number of people employed by this retailer is 2,2 mln. According to the results of financial year 2019-2020, total revenue of Walmart reached almost US$ 524 bln.

Home Depot is a retail chain of construction materials and household products; it was established in 1978 in Atlanta. This company is the largest US operator in this segment: it unites almost 2 thsnd of shopping facilities in the country and 300 shopping facilities abroad.

Epicenter is one of the leaders of Ukrainian retail, it is the real No.1 on Ukrainian market of non-food products. Nevertheless, the company’s impact is not limited by retail market.

Over 17 years this company continues to make an important contribution in economic development in general; each year it creates the thousands of jobs, invests billions of hryvnas in trade centers, logistics and production.

According to the scope of impact this company may be compared with Walmart and Home Depot, the giants of American retail market. It is clear that these companies are the global retail leaders; amounts of their revenues exceed significantly the rates of any Ukrainian company, and even the GDP of many states.

Nevertheless, comparison of Walmart and Home Depot performance results within the framework of relevant national economy evidence that, according to the numerous parameters, Epicenter is as much important for Ukraine, as the largest American trade chains for US.

It is interesting that amount of taxes paid by the companies in relation to the total revenue for Ukrainian retailer is significantly higher. In 2020 Epicenter group paid UAH 5,6 bln. of taxes and duties, which is equal to 8,7% of its turnover.

For comparison: the ratio of taxes paid to the revenue of Home Depot during the last financial year was 3,2%. The same parameter for Walmart is less than 1%, but this company is sometimes accused in tax evasion.

So, Epicenter makes significantly larger contribution in National Treasury of its country than the giants of American trade.

It is extremely important that a part of this money comes to the local budgets which may use them for improvement of social infrastructure and general development of the territories.

Epicenter was always committed to the development of cooperation with Ukrainian producers. This policy enabled to diversify the supplies, to decrease logistic costs, to be less dependent from exchange rate fluctuations, and to develop internal production.

Now this retailer cooperates with more than 3 thsnd. of Ukrainian producers who supply their products to its trade centers.

Having received the stable platform for sale of products in Epicenter chain, many enterprises expanded their production capacities, improved the product quality and entered the international markets. 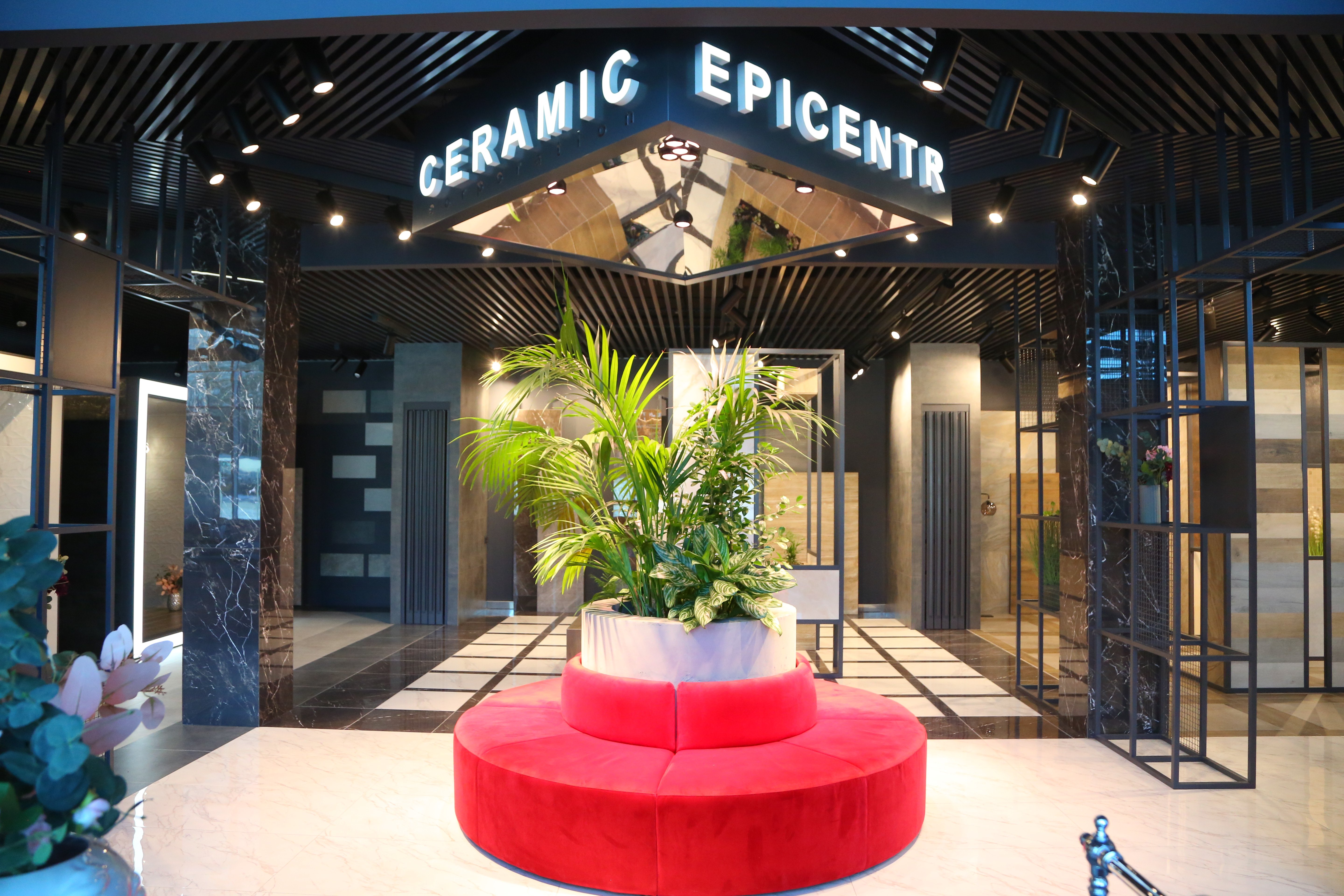 In 2020 this company continued to invest in all key directions of its activities, having invested in development UAH 10,3 bln. In particular, the company completed construction of the first stage of ceramic tile production factory in Kalynivka village, the region of Kyiv.

During the next two years the group intends to invest US$ 95,7 mln. in expansion of production capacities. In particular, it plans to put in operation the second, third and fourth stages of factory in Kalynivka, and to increase in such a way its capacity up to 15 mln. sq m per year.

Modernization of Karpatska Keramica factory in Kalush is planned; as a result, its production capacities will be increased from 2,5 mln. sq. m to 8,5 mln. sq. m. In addition, Epicenter also intends to invest US$ 15 mln. in dry construction mix factory and US$ 47 mln. in gas concrete factory. 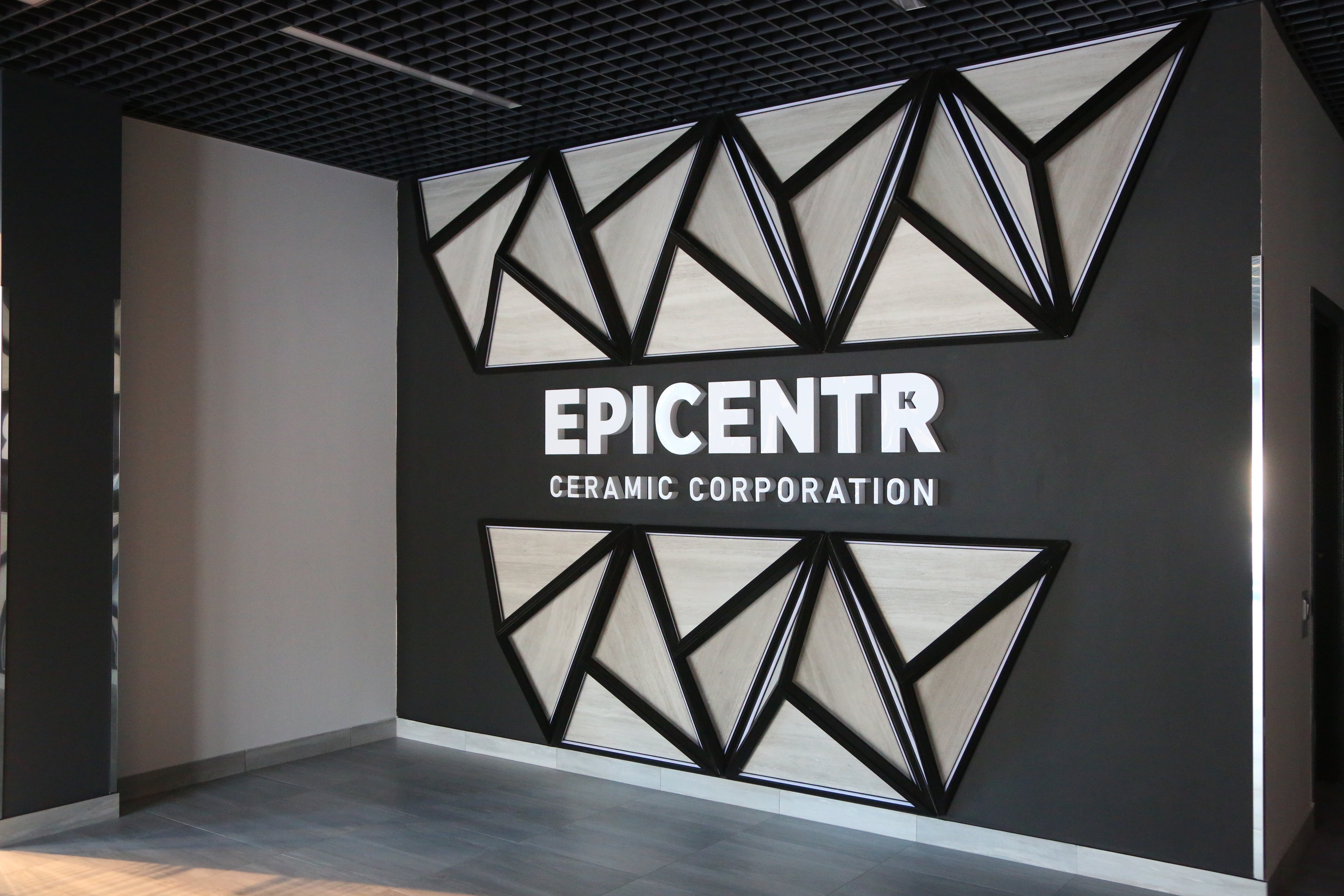 In 2020 the company invested US$ 70,9 mln. in agrarian sector, having increased the number of own elevators to 14.

It made possible to increase simultaneous storage capacities up to 1,5 mln. tons. In 2021-2022 the group plans to construct additional five elevators, and total amount of investments of Epicenter Agro will reach US$ 150-170 mln.

Closer to the Consumer

At the same time Epicenter continues the active development of its own chain of trade centers. In 2020 the company opened seven new and six refurbished trade centers in different regions of Ukraine.

At the beginning of 2021 the trade chain of this retailer included 64 Epicenter trade centers and 11 Nova Linia hypermarkets.

In line with that, according to the results of comparison of shopping facilities per 1000 of people in Ukraine and US, the saturation of Ukrainian retail market is very low.

On one hand, it means that access to comfortable shopping with wide product range and best prices is limited for many Ukrainians. On the other hand, it means the great prospects for retail trade development, especially in the regions.

Strong regulation in the sector, the difficulties in receipt of permits and documents for construction and putting in operation of commercial real estate are the limiting factors for active development of human-oriented retail.

West states understand that trade is the driver of economy, and, accordingly, they decreased the level of regulation and tax burden in this sector. If Ukrainian power can adopt the similar policy, development of retail and economy in general may be really accelerated.

In any case, during the next two years Epicenter intends to continue dynamic expansion of its presence on the market by opening of approximately 50 trade centers of different format.

According to the words of Volodymyr Honcharov, Deputy General Director, Retail Trade Director of Epicenter K, the key tasks in process of retail chain development are diversification of client services, opening of concept shops in trade centers, opening of small-scale facilities, high tech and innovation implemented in the processes.

The year of 2020 was featured by coronavirus epidemics, and the company was forced to react quickly to the new consumer needs and to develop the sector of products of the first need.

Three new directions appeared in the chain: FOOD Market, Pharmacy 100+ and Protection Agents. In 2021 this retailer plans to open the shop-in-shop sites FOOD Market and Pharmacy 100+ in all Epicenter trade centers.

In addition, in 2020 the Lighting studio, conceptual boutique of decorative lighting, appeared in the chain, and re-design of Mon Chéri, beauty product shops, was started. Automall and Lapki, the products for pets, started to work in the new and modern format, Interior Studio saloon, Key Master service and House of Water conceptual boutique were opened. 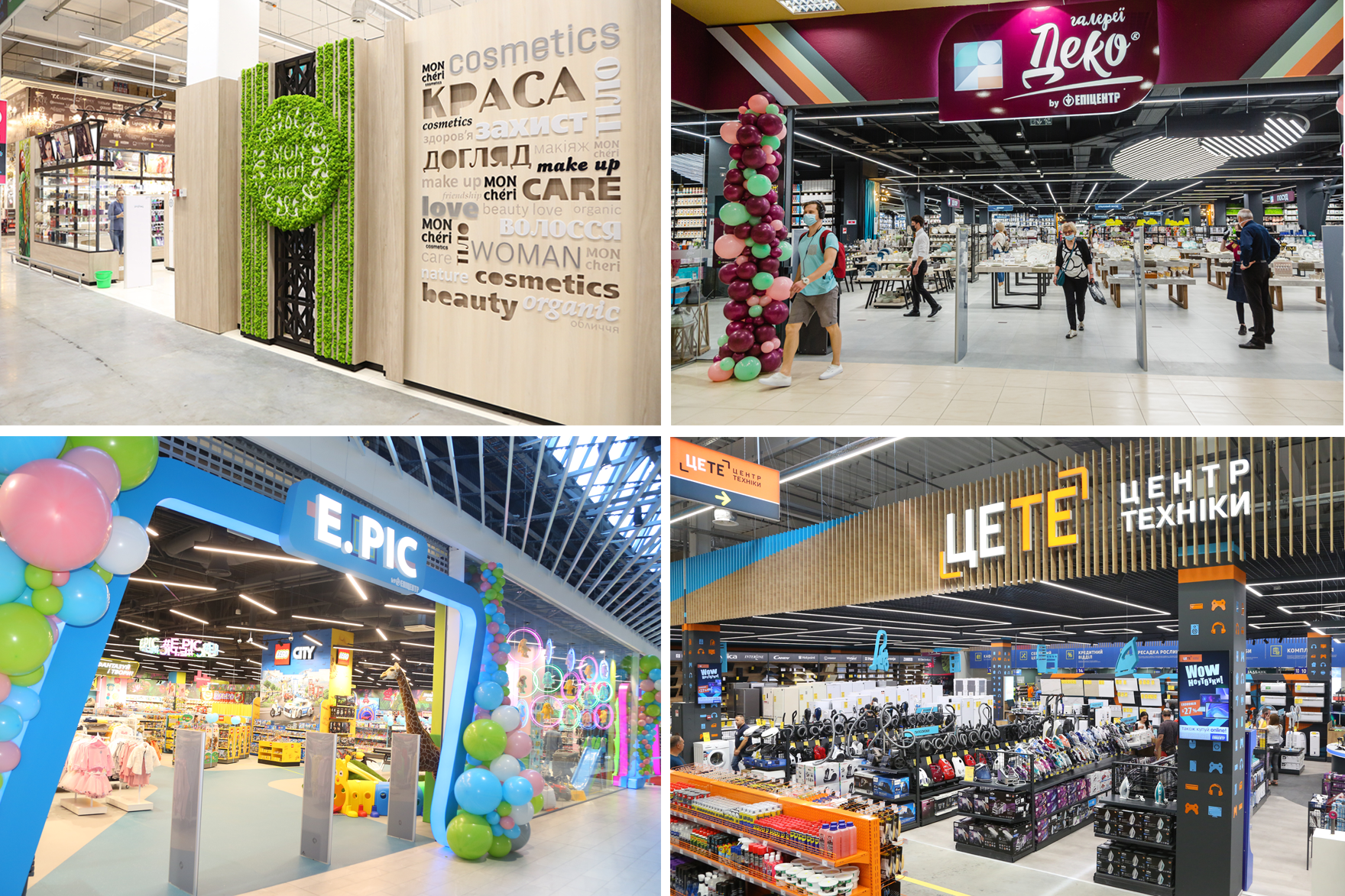 In addition, in 2020 Epicenter for the first time opened some of its shop-in-shop trade directions out of the premises of its own trade centers.

Indeed, three Deco Galleries were opened at Dream Town, Arkadia and Retroville, trade and recreation centers in Kyiv. E.PIC, the shop with products for children, was opened in Retroville TRC. In 2021 the company will continue to open its own trade formats out of the limits of Epicenter chain.

In addition, as a franchisee, the company also develops the chain of Intersport, Swiss sport wear shops. In 2020 eight new shops of this brand were opened in Ukraine, in particular, Intersport Outlet City, the largest sport outlet opened in Dream Town.

In 2021 the group plans to increase presence of these brands in Ukraine by opening of 18 Intersport shops at its own trade centers, and 17 points of sale of Intersport, 4F and The Athlete's Foot out of the limits of Epicenter chain. 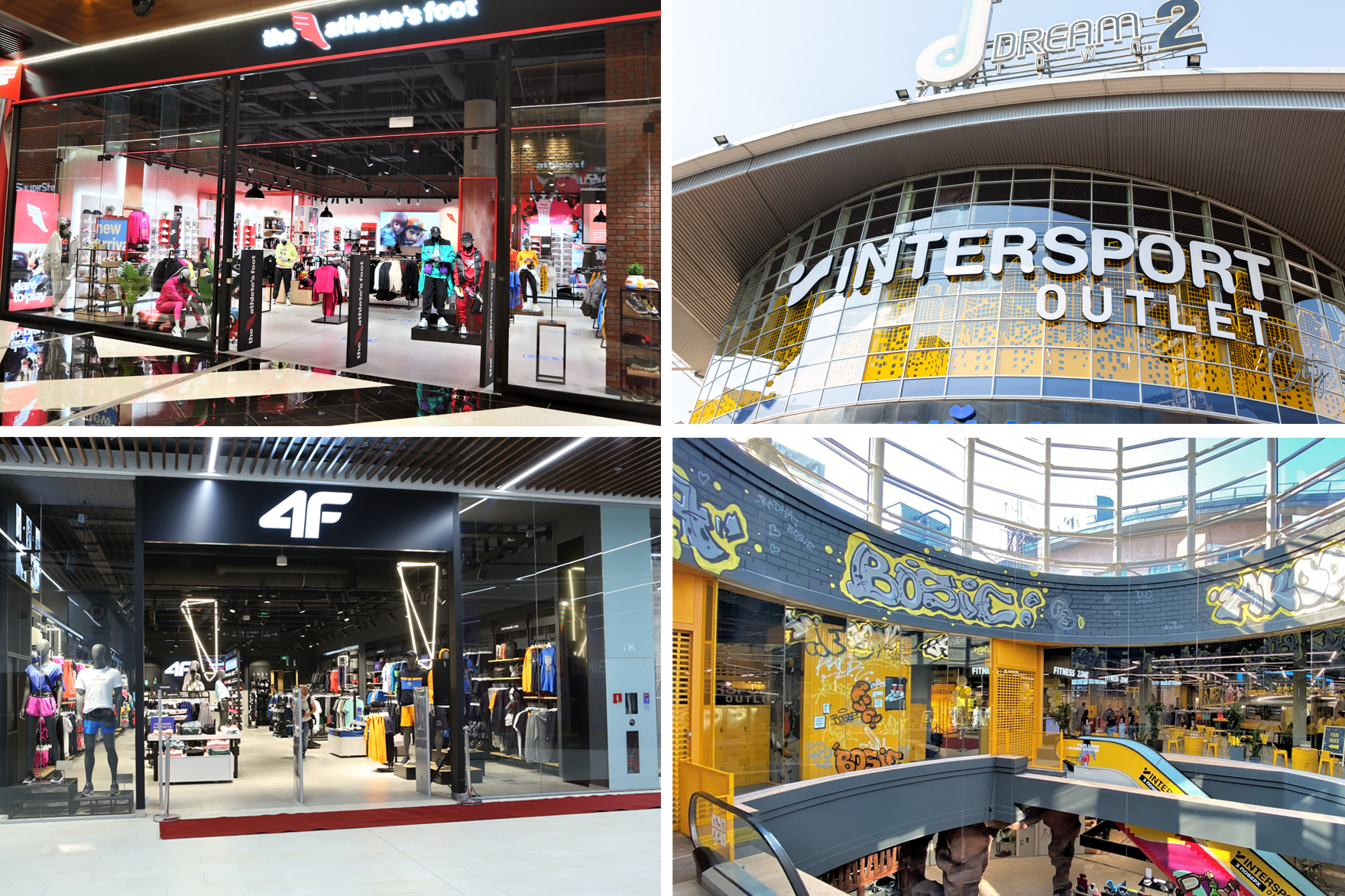 Buy Wherever You Wish

In addition to development of the off-line projects, during the last years Epicenter actively develops its presence on-line and omnichannel services aimed at providing easy shopping for the consumers.

Since 2020 Epicenterk.ua E-shop started to work as a full-fledge marketplace and significantly improved its performance parameters. According to the traffic, it became the second largest on-line retailer in Ukraine, having reached 20 mln. of visits per month.

In 2020, in order to improve the level of service, the E-shop Order Delivery Centers were opened in the trade chain basing on process automation, address system of product storage and comfortable waiting area for the customers.

For the purpose to make on-line shopping even more comfortable for the consumer, the company started to develop the ODC chain out of the limits of its own trade centers. Eight such ODCs operate at this moment. In total, E-shop manages 91 Order Delivery Centers.

In 2021 Epicenter plans to double the traffic in on-line shop and the number of products offered there, to implement innovative IT solutions, to deploy the project of automated parcel terminal for product pick-up.br> 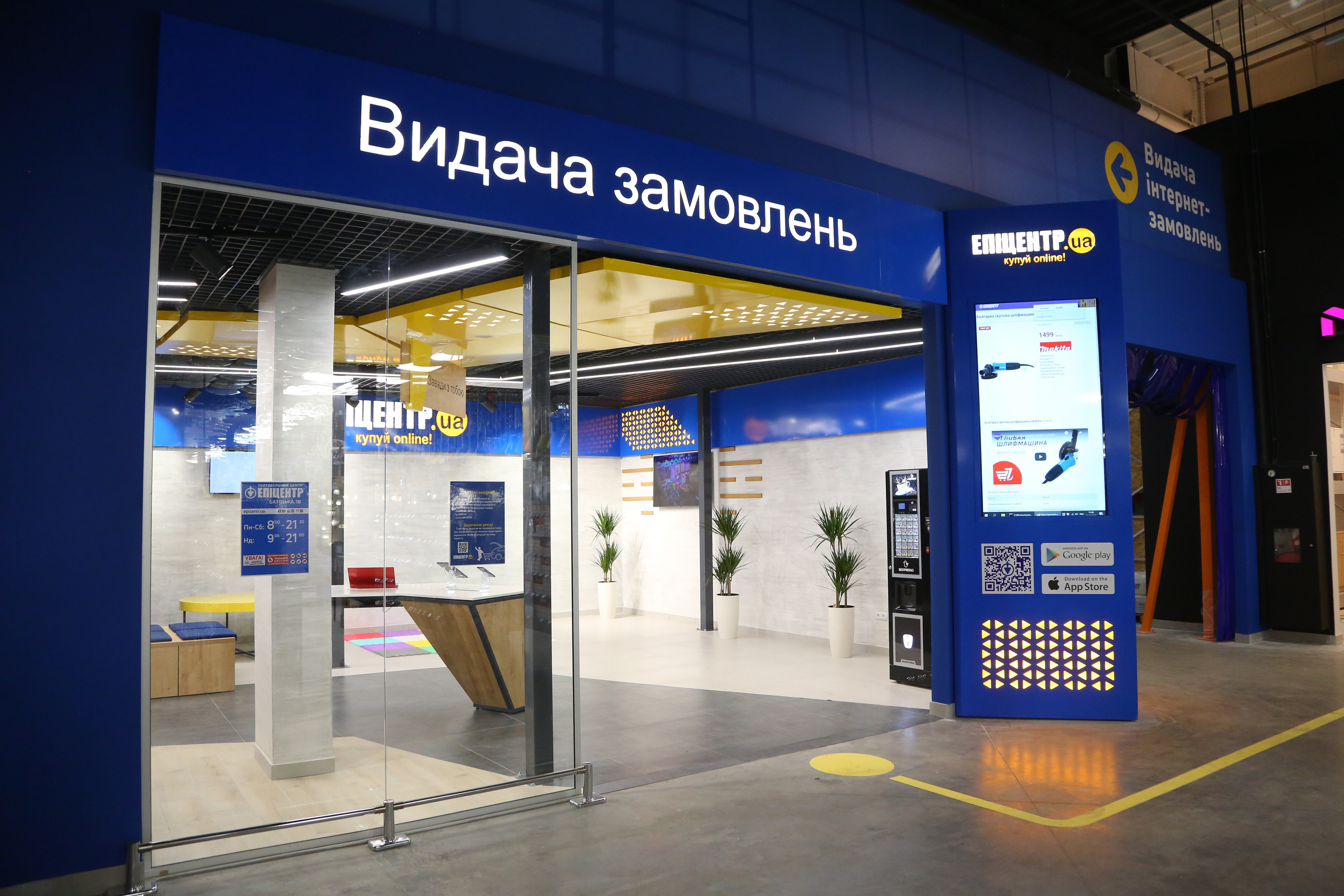 One of the main points in operations of the group in 2021 is to focus on logistic capacities.

In particular, basing on logistic complex in Kalynivka village, the region of Kyiv, the company starts to construct the site of special importance with multi-million investments. In addition, the company will construct four strategic sites in the regions for US$ 248 mln.

The group of companies will expand its auto fleet – it will purchase 200 large cargo trucks Mercedes-Benz Actros and 300 transport vehicles Mercedes-Benz Sprinter for total value US$ 39,5 mln.

The Largest Investor and Employer

In 2021-2022 Epicenter plans to invest in Ukrainian economy the amount which has no parallels with other internal investor.

The company underlines that it had never experienced before such large-scale and efficient work of the team as it was on the background of coronavirus year which accelerated launching of all the processes. 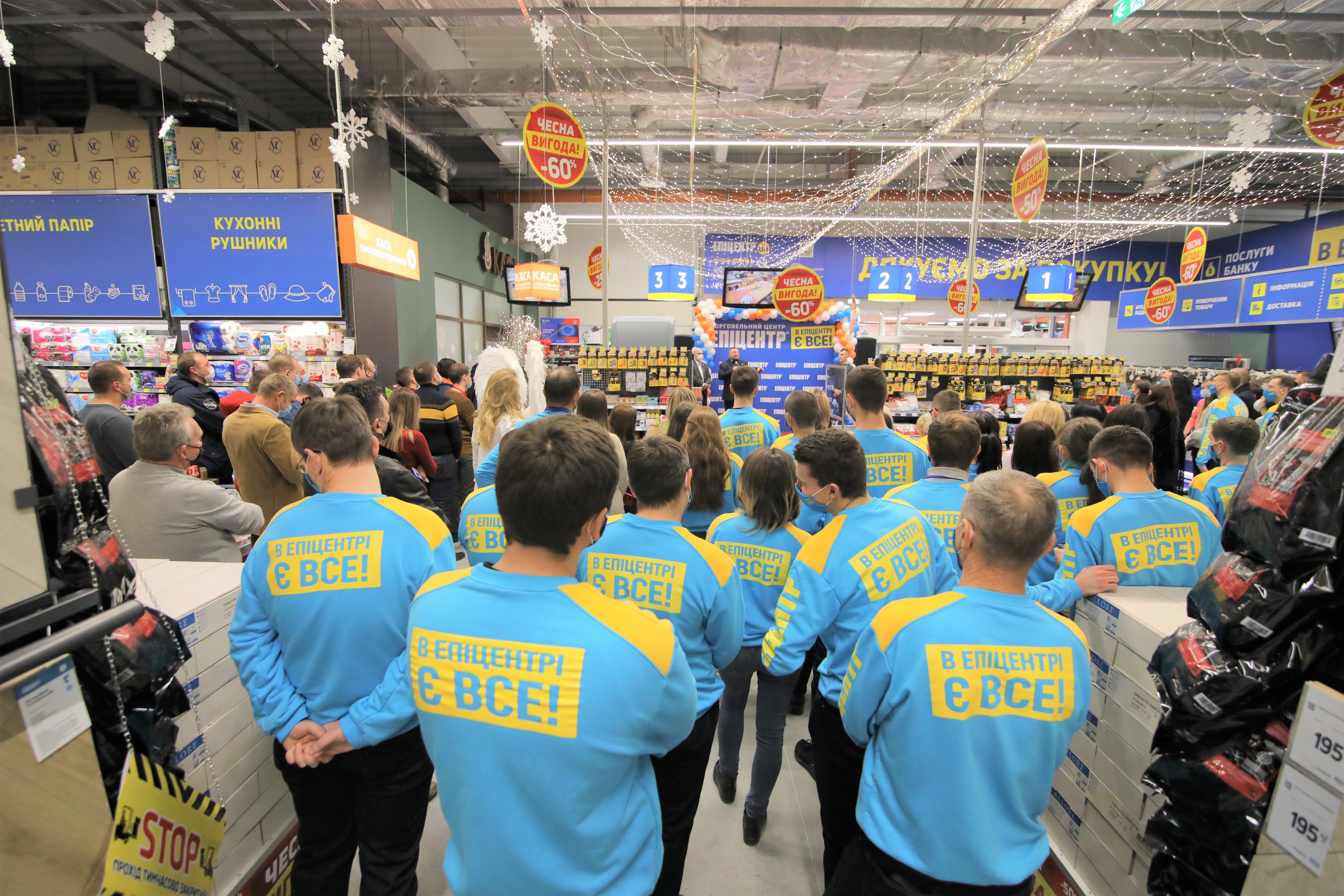 In 2020 the company created 1 350 jobs; it is one of three largest employers in Ukrainian retail. Over 34 thsnd. of employees work in its structure.

“Despite the complicated investment climate in our country, Epicenter K continues to develop actively its business in Ukraine. It is our principal position based not only on economic indexes, but on the wish to invest in the future of our country, to develop economy and to create the new jobs”, – stated Halyna Herega, co-founder and CEO of Epicenter K LLC.

Taking in consideration the company scale and its degree of impact on economy, it is possible to state that it is a company of strategic importance for the state and for its people. Moreover, we have to take in consideration that FMCG goods form the main part of its product range.

This fact demonstrates once more that it is unacceptable to close or limit operation of the chain. It will result in significant harm caused to SME, suppliers, producers, the hundreds of other companies, and in real decrease of tax payments.

Developed states understand the importance of operation of strategic commercial facilities. Even during the second wave of Covid-19 Castorama, OBI, Leroy Merlin were open in main part of EU states, Home Depot, Walmart and IKEA were open in US.